Every day we take for granted the gas we put in our cars to get us where we’re going. For over 30 years, we’ve ignored crisis. And yet, pretending it’s not a problem hasn’t made it go away. Current financial times are gloomy. And the rapid rise of the cost of oil, and the scarcity of it, have driven us to the brink.

And as we prepare to elect a new President, neither of the candidates are offering anything new. Empty campaign promises won’t carry us into a brave new world. Dealing with America’s energy deficiencies require a plan. And I think the Pickens Plan is a giant step in the right direction.

We Are in a Crisis 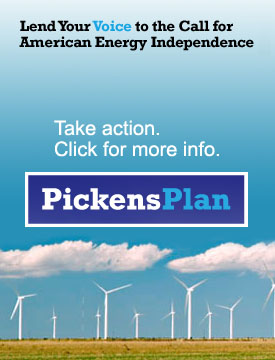 Our dependence on foreign oil forms the intersection of the three most critical issues America currently faces: the economy, the environment and our national security.

There is a Solution

America is blessed with the world’s greatest wind power corridor and abundant reserves of clean natural gas. The Pickens Plan will utilize these tremendous resources to build a bridge to the future — a blueprint to reduce foreign oil dependence by harnessing domestic energy alternatives and buying time for us to develop even greater new technologies.

The Plan calls for building new wind generation facilities that will produce 20% of our nation’s electricity and allow us to use natural gas as a transportation fuel. The combination of these domestic energies can replace more than one-third of our foreign oil imports. And we can do it all in 10 years.

We Can Bring Change

On January 20th, 2009, a new President will take office. We’re organizing behind the Pickens Plan now to ensure our voices will be heard by the next administration. Together we can raise a call for change and set a new course for America’s energy future in the first hundred days of the new presidency — breaking the hammerlock of foreign oil and building a new domestic energy future for America with a focus on sustainability.

You can start changing America’s future today by supporting the Pickens Plan.

And you can help right now, by signing the “What’s Your Plan?” Petition, telling Senator Obama and Senator McCain to adopt the Pickens Plan – or tell us what their plan is – before Election Day.

Lend your voice to the call for American energy independence.

Click here for more information about the Pickens Plan.